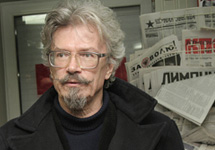 Tracy Dove, editor of Russia Today, is a Professor of History and the Department Chair of International Relations at the University of New York in Prague.

Russian democracy is alive and well in Russia. Vladimir Putin was elected with an overwhelming majority in two free elections and would be elected again if he ran in 2008. Putin is a reflection of what Russian society is today; proud, patriotic, powerful- he is a nastoyashyi muzhik and the Russian people identify with him. He is a spy, a martial arts expert, a state capitalist and a world leader determined to regain the great power status that most Russians feel they have been cheated out of by the Trojan Horse of western economic sabotage. Soft-talking and quick with the fist, he may possibly be the best statesman that Russia has had in the last two centuries. I am not an apologist, and I certainly don't want him as my president. No one, really, in the western world would. Russia is not as integrated as most people think, and without a strong, centralized government the country would rapidly fall apart into regions- the fault lines running conveniently along the lowlands of economic prosperity. Without launching into a history lesson, Russia was founded upon conquering territories and assuring loyalty to Muscovite power by installing military governors to rule over the new acquisitions- a practice that lasted until 1917. It has never been a country that invited common participation in politics, and it may come as a surprise to most readers, but the average Russian peasant before 1917 actually had more democratic rights in their communes than the gentry or nobility ever held in St. Petersburg; indeed, the higher up one looks into the Russian hierarchy, the less control there was over the office. At the top was the Tsar, who tolerated no interference on his decision-making that he didn't ask for himself. For this reasons Russian autocracy is known as samoderzhavie, which translates roughly as self-administration and suggests in no way that anyone but the autocrat will have the final word. Russia became a state only through constant warfare, and survival meant centralism, militarism and reactionary rule. It is perhaps no wonder that Bush and Putin find dialog so easily- they both abhor terrorism because it is a significant threat to the integrity of the state. What's worse, terrorists are non-state actors, making their capture or liquidation more difficult than when enemies were recognizable states. Putin's strong-arm tactics are nothing more than the instinctive reaction of collective Russian history in the office of the executive. Linguistically, the individual Russian citizen is actually not even counted; the language itself doesn't have a word for "Russian"- as in, "I am a Russian." Instead they have only the adjective- "Russian"- used to describe the man, not give him a state. Winston Churchill once said that understanding Russian politics is like watching two dogs fighting under the carpet; pull the rug away, and both parties are suddenly innocent bystanders and quite surprised by the intrusion. Once again, Mr. Churchill has given us an anecdote that is both humorous and accurate. If I were a Russian, I would vote for Putin. If I were an American who could vote in the upcoming 2008 election, I would vote for Putin; he is by far the most talented leader of Russia in the last 100 years, and most predictable. To open up Russia at this time to western democracy is premature; fair play is considered weakness, and the political process is still too premature to advance a leader who could introduce ultimate civil rights while holding the country together. And changes to this system will not come from outside Russia proper, so western pressure will only antagonize the situation. If you are looking for more transparency in Russian politics within the next two generations, you will be disappointed. Until a middle class with property rights becomes a force in the country, Moscow will continue to act as state capitalist (Yukos) and unopposed political power in the name of the Russian people. Change toward greater plurality is of course welcome, and a level playing field in politics is the eventual goal. But judging from Russian history, it won't come anytime soon. Tracy Dove, editor of Russia Today, is a Professor of History and the Department Chair of International Relations at the University of New York in Prague.