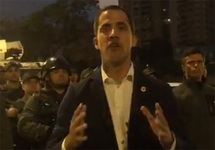 Не для чма болотного, который не то,что по английски не понимает, но и по русски ничего не доходит до тупого головастика.
Curiously, that’s not how the Venezuelan regime’s admirers used to speak of “21st century socialism,” as it was dubbed by Hugo Chávez. The late Venezuelan president, said Britain’s Jeremy Corbyn, “showed us there is a different and a better way of doing things. It’s called socialism, it’s called social justice, and it’s something that Venezuela has made a big step toward.” Noam Chomsky was similarly enthusiastic when he praised Chávez in 2009. “What’s so exciting about at last visiting Venezuela,” the linguist said, is that “I can see how a better world is being created and can speak to the person who’s inspired it.”
" In a lengthy obituary in The Nation, New York University professor Greg Grandin opined, “the biggest problem Venezuela faced during his rule was not that Chávez was authoritarian but that he wasn’t authoritarian enough.”